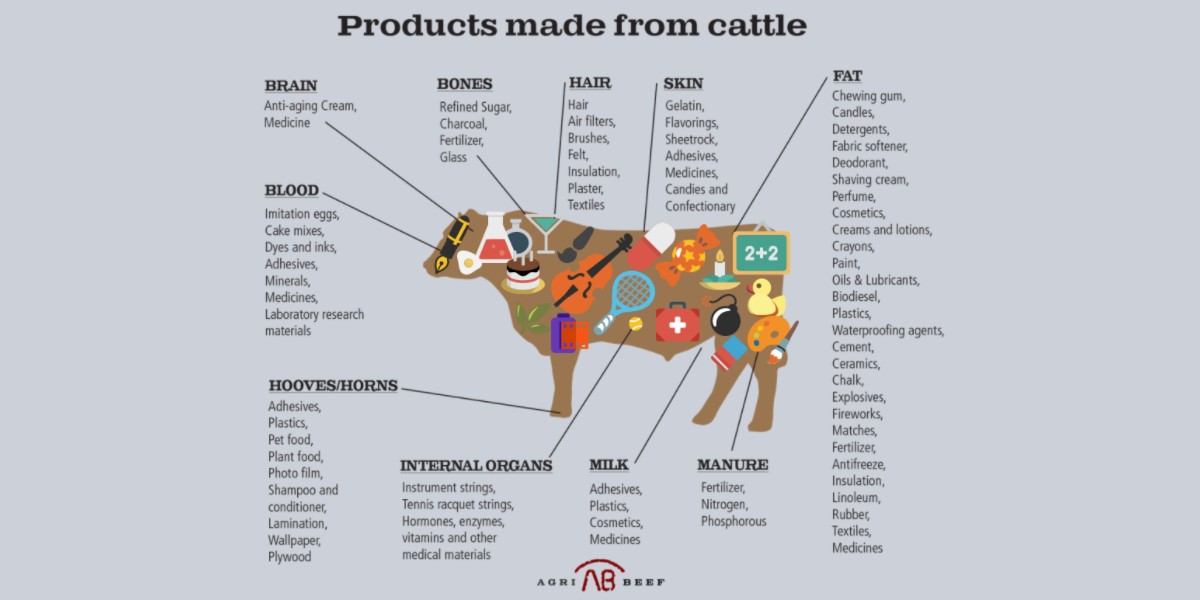 Beef companies tend to focus on the beef.

It seems like an obvious priority, until you consider that edible meat makes up a little less than two-thirds of the materials produced in a processing plant.
The rest may not be as appetizing, but it’s just as important for both the health of a beef company – and a host of other industries who need materials for items you use every day.

From soap to fertilizer to medical research, we have found dozens of practical, innovative uses to make sure that every piece of the steers we process is put to good use. Consumers might not be surprised to find beef processing supplies hides for leather goods the world over, but knowing rendered beef byproducts are in their makeup, their old camera film and the foul ball they caught at an MLB game is another story.

“What is perceived as waste is anything but,” said Jesse Castaneda, General Manager at Agri Beef’s processing plant, Washington Beef. “To me, it’s recycling. We are keeping these by-products from entering the landfills systems by turning them into products needed in our daily modern lives. This in our view is the ultimate form of environmental sustainability.”

A typical steer at the time of processing is about 1,400 pounds. Of that, just over 500 pounds is considered inedible or close to. The muscles and almost all organs are harvested as food. While some beef fat is left on edible pieces, there is about 180 pounds that is removed and rendered into tallow. The hide weighs about 90 pounds before it is tanned and cured. Another 90 pounds or more is leftover bones. Up to 80 pounds is water and food that hasn’t been fully digested. About 8 pounds of dried blood is also removed. 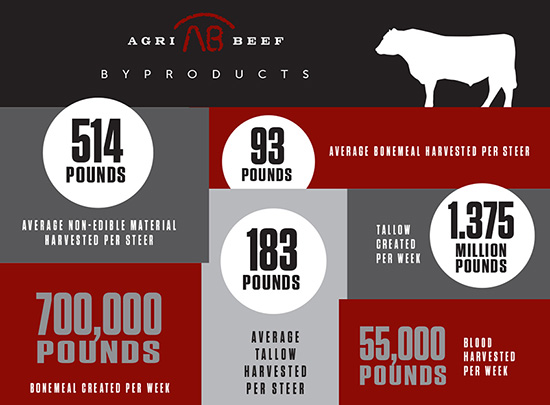 Of the non-edible items, the hide goes to entirely to leather production. Bone is ground into bonemeal and combined with blood for organic fertilizers, among other uses. Then there are the less obvious uses.

Historically, the gelatin produced when rendering tallow was bought by camera and film companies, like Kodak, providing a key component for the emulsion used on film before the digital era. While that time has passed, it is still used to make gelatin desserts (like Jell-O) and cosmetics.

Another former use was focused on the pancreas, which was saved in order to harvest bovine insulin, which was processed and used to treat human diabetics for years. Synthetic insulin is now the treatment of choice. Medical research is still done with pituitary glands. Same with the pericardial (heart) lining, which has been used to help develop human heart valves.

Today we have more agricultural and industrial uses for many of the byproducts, including clever ways to be more sustainable.

Strange as it may sound, the water and other leftovers in a steer’s stomach at processing have helped Agri Beef cut down its processing plant natural gas usage by 20 percent. That’s because we capture the methane left over in the cow’s system and use it in lieu of natural gas. It has the double effect of saving on natural gas usage and preventing the methane from being released into the atmosphere. The rest of the stomach’s contents are given to nearby farmers who can used it as a fertilizer. Water left over from all processes is treated for later agricultural use.

Agri Beef and its brands are always looking for new ways to effectively use pieces of our cattle and expect our partners to continue to evolve with technology and the ingenuity of the folks working in rendering facilities. The Washington Beef processing facility has foregone sales in the past to provide pieces of the cattle to local schools for scientific pursuits.

“We are always trying to find a value for every piece of the animal, either for education or for something useful in another culture that we might not immediately understand,” says Brad McDowell, AB Foods President.