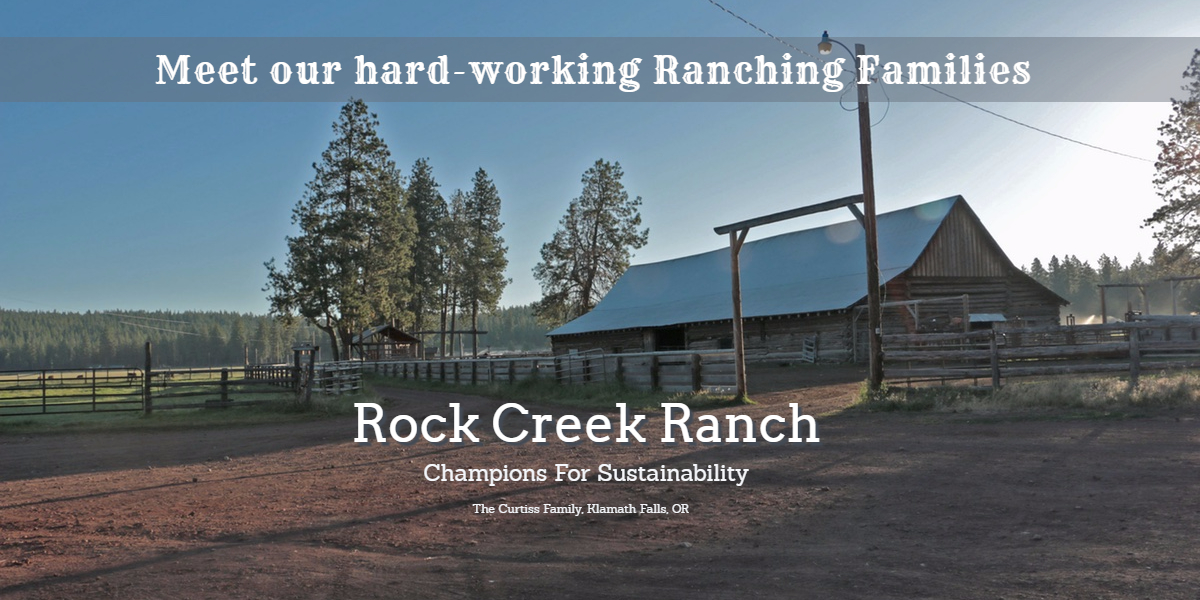 As you crest the hill above Rock Creek Ranch, you are greeted with a breathtaking view; cattle graze in a vibrant green pasture and Klamath lake gleams nearby, filled with egrets, cranes, and varied wildlife. Snowcapped peaks loom in the distance as we watched rancher Cam Curtiss trot his sleek chestnut horse through his yearling calves. Later, the quiet-mannered rancher passionately describes the lifestyle he and his wife, Jennie, live as we stand in the early morning shadow of what Cam suspects is one of the oldest and largest wooden barns in Southern Oregon. Like many of Agri Beef’s producers, sustainability, and conservation of the environment are at the forefront of the Curtiss’ day to day operations and are what makes Rock Creek Ranch especially unique. 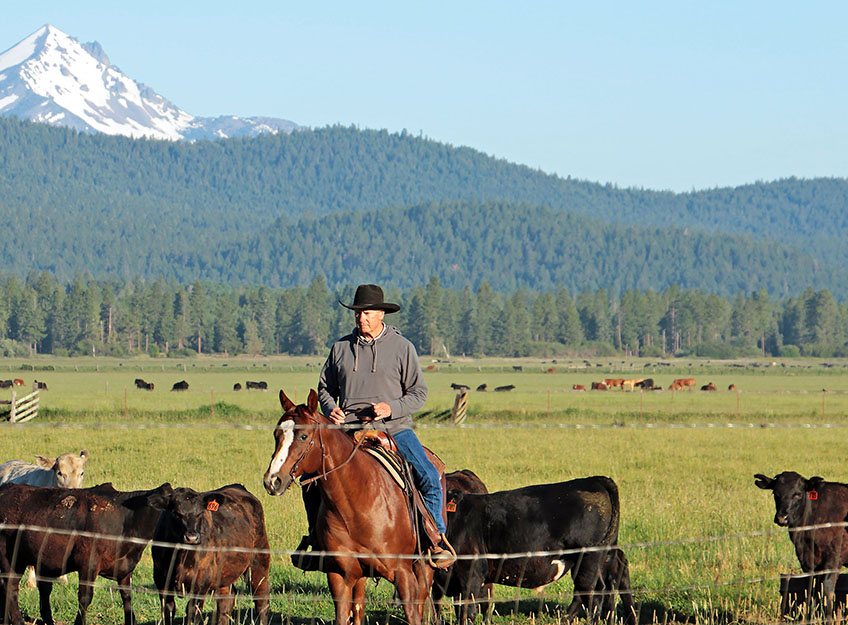 The morning sun warms our backs as Cam recounts how the Curtiss family immigrated to Washington state from Finland in the late 1800’s. Cam’s father, Charlie, got his start managing a concrete factory while studying engineering but realized his desire to ranch and purchasing Rock Creek Ranch in Klamath Falls, Oregon in 1964, began his ranching legacy. He also owned and operated ranches in Bonanza, Oregon and Red Bluff, California through which he passed his knowledge and passion for the land onto his son.

Driving along the sparkling lakeside, Cam passionately describes his many sustainability and conservation efforts. “I like to give a little back to nature,” never a truer statement spoken as he shows off the 26 acres of wetland along the lake that he has been working to restore for native wildlife. We continue our drive, passing through a tunnel beneath the highway that splits the ranch. “No one is going to mention the tunnel?” He asks with a small smile and begins to describe how he worked with the State of Oregon to find the safest method for cattle to cross the busy highway. They drew from examples set forth by Dr. Temple Grandin, a highly respected animal behavior consultant, and the result was a tunnel that is just large enough for us to drive through in the pickup and not too scary for cattle to traverse…not an everyday sight.

Bright green meadows, pine and juniper trees and the sound of morning birds fill the air as Cam proudly shows us that the ranch boasts a small hydroelectric plant that produces electricity which is sold to the local power company. We also learn that the creek which powers the small plant begins and ends on the ranch and is part of the way Cam utilizes natural resources to give back to the community and protect the environment. 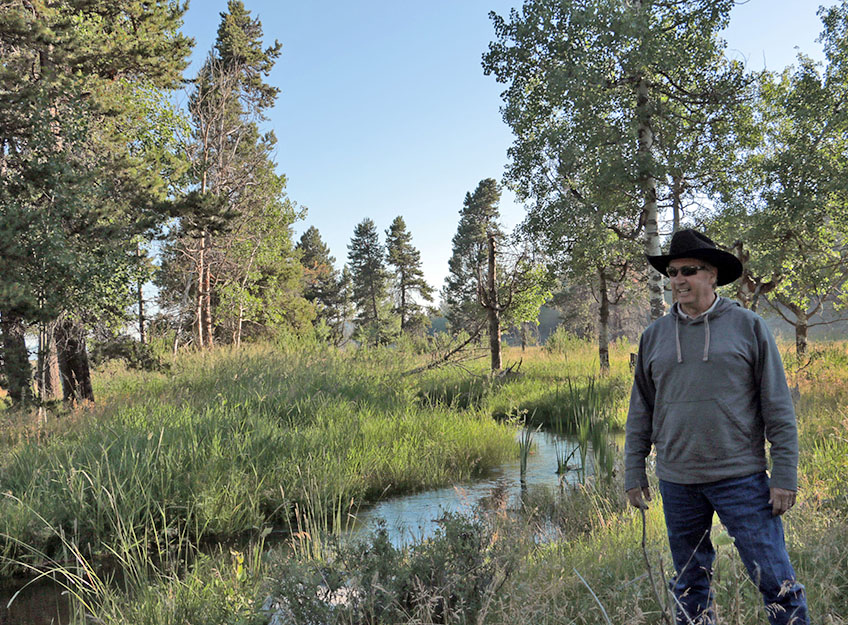 Standing in knee-high green grass, surrounded by young aspen trees near the thriving, grass filled bank of Denny Creek, (yet another conservation effort intended to restore the creek to its historical channel) Cam gestures toward an area a few hundred yards away. “That is where we had the Ride and Tie Championship Race, and I set up a stage for Jennie to sing on.” As the story unfolds, we discover that music played a huge part in the bond between Cam and Jennie, as they were part of a local band known as “Outta Nowhere.” Fondly, he told us how he played bass and Jennie sang for the local community, and it was actually because of her singing that they met and fell in love years ago.

Surrounded by gorgeous tree-covered mountains, healthy wildlife, rich land, and family, Cam looks out at the egrets, cranes and cattle living in harmony and remarks in his quiet way, “I have the best job in the world.” 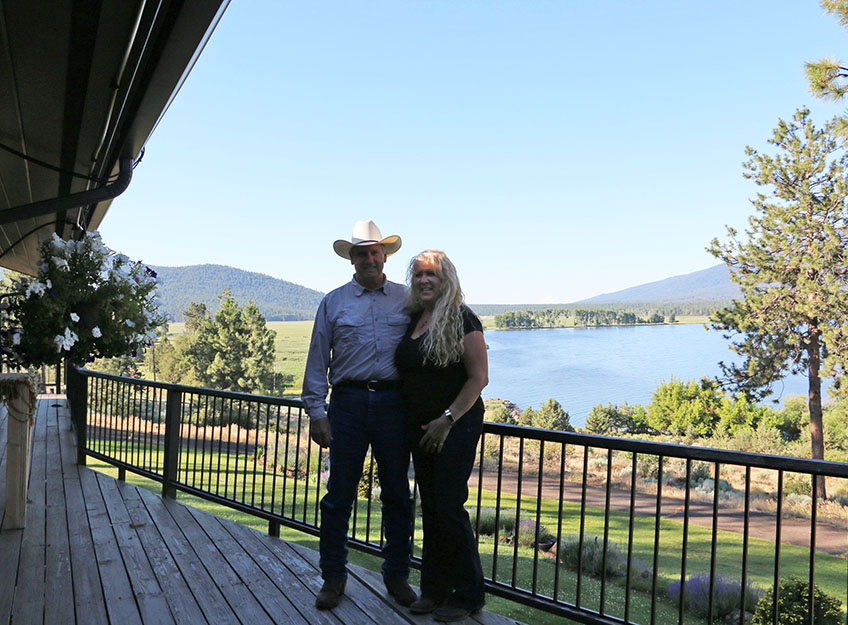